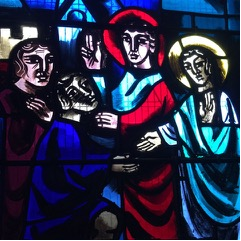 History of All Saints Church, Wellingborough

1867 – During construction arches on the south side of the building and part of the roof collapsed.

1868 – Consecration by Rt Rev Dr Jeune, Bishop of Peterborough. The church cost £4,000 to build and the Architect was Mr A Buckeridge

1872 – Constitution of All Saints as a separate parish. 1st Vicar, Rev Frederick Willis, instituted and inducted.

1887 – 3 of the East Windows installed, designed by Charles Kempe.

1890 – Narthex and western extension to the nave dedicated.

1898 – Alabaster altar piece, carved with emblems of the Passion designed by Kempe installed.

1918 – Church Golden Jubilee. The Rood Screen made of oak and designed by Talbot Brown installed.

1920 – First World War Memorial dedicated by the Bishop of Peterborough.

1932 – Oak choir stalls in the Chancel dedicated to Canon William Terry were installed. Pulpit in memory of Agnes Annie Smith and designed by F Howard installed.

1990 – Nave Altar constructed of oak and wrought-iron by students of Wellingborough College installed.

2003 – Millennium Flame arrived for a year and a day. Major appeal to raise funds to repair roof and upper masonry launched. (All Saints’ Church was guardian of the Flame for a year and a day. The Flame was originally kindled at the beginning of the new millennium and used by the Queen to light the first of her Golden Jubilee beacons. The Millennium Flame will tour the UK until the Queen’s Diamond Jubilee in 2012 raising funds for charities.)

2007 – After 2 years of work, major repairs to the roof and upper masonry were completed.

2010 – In addition to his duties at All Saints, on September 12th the Vicar was installed as Priest-in-charge of All Hallows, Wellingborough.

This is a summary of some of the more important dates in the life of All Saints Church to date.

The church of All Hallows is the ancient parish church standing to the north of the market square possibly on the site of an earlier church. The building dates from the late twelfth century although the south entrance is all that remains from that time. The church was developed over the centuries and the building we see today was largely finished in the sixteenth century. A concise description of the church is given in the Victoria County History for Northants, Volume 4 (available on www.british-history.ac.uk)

All Hallows is an old dedication which means the same as All Saints. Sometime in the 19th century the church became widely known as St Luke’s although there seems to be no evidence that the dedication was ever to St Luke. The name continued in use and many of the men who enlisted in the Army in the Great War gave their parish of birth as ‘St Lukes’, Wellingborough. Some old picture postcards also refer to St Luke’s and it is perhaps no coincidence that one of three annual fairs in the 17th century was held on the feast of St Luke (Bridges vol 2, p149).